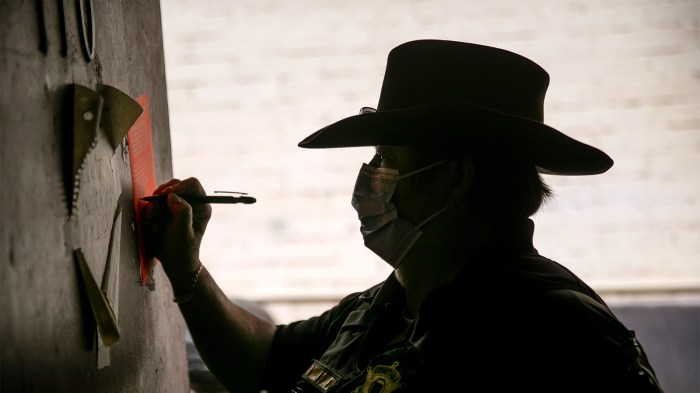 Since the pandemic began, housing experts (including one of the authors of this article) have been predicting that the pandemic’s economic fallout would produce an eviction “tsunami” that could put as many as 40 million people out of their homes.

The experts are still waiting.

When the pandemic first surged in the U.S., the dire predictions prompted federal, state and city governments to enact emergency policies to temporarily ban evictions. Two national eviction moratoriums lasted nearly uninterrupted for about 17 months, until August 2021, and some states and cities still have eviction and other tenant protections in place today.

When the national moratorium lifted, housing experts, renter advocates and policymakers braced for a surge of evictions. Now, four months later, evictions have increased, but data suggests that a tsunami has yet to materialize. Some still think one is coming, as courts begin working through a backlog of eviction filings, but according to Eviction Lab, the country’s most comprehensive tracker of eviction data, evictions in most places are nearly 40 percent below the historical average.

Theories abound as to why we have not witnessed a cascade of evictions. Some observers think that social policies, like the eviction moratorium, stimulus payments, extended unemployment insurance and rental assistance have staved off disaster. Others think “mom-and-pop landlords” who tend to deal with lower-income tenants have been more accommodating or reluctant to lose tenants than expected. A few commentators have pointed to problems with the data underlying predictions of an eviction tsunami, and to the existence of contradictory data. Another view is that a tsunami of evictions is indeed occurring, only we can’t see it: Even as courts halted formal evictions, millions of tenants faced “informal evictions” over the course of the pandemic, with landlords refusing to make necessary repairs or changing the locks without notice or using other means of harassment.

The reality is undoubtedly some combination of the above, and given the lack of nationwide eviction data, parsing out the relative contributions of these factors is likely not possible. The United States has no national eviction database, and as of April 2021, one-third of U.S. counties don’t report annual eviction data. Informal evictions, which some estimates suggest could be over five times more common than court-ordered evictions, aren’t tracked at all.

But regardless of how we arrived at the unexpected place of having fewer formal evictions than before the pandemic, what we can say in hindsight is that a figure of 40 million evictions was likely far too high. That’s because the data used for this estimate and several other early predictions was a poor barometer of likely evictions.

Every week, starting in April 2020, the U.S. Census Bureau’s Household Pulse Survey asked tens of thousands of Americans how confident they were in their ability to pay rent the following month. The responses were jarring. Week after week, between roughly a quarter and a third of national renters indicated a lack of confidence in their ability to pay their next month’s rent.

These figures led to an August 2020 prediction from a consortium of researchers and organizations, headlined by the Aspen Institute and the COVID-19 Eviction Defense Project, that 30 to 40 million renters (in 12.6 million to 17.3 million households) could be at risk of eviction.

This prediction triggered a rush of headlines that repeatedly cited the 40 million estimate. Housing advocates seized upon the prediction to push President Trump to extend the eviction moratorium, and members of Congress relied on it to advocate for additional resources, eventually securing the passage of nearly $50 billion dollars in rent assistance.

The “tsunami” narrative helped our country’s machinery creak into gear, and likely ended up saving many Americans from eviction. But by all accounts, it was based on an overestimate — one that has since stoked an unhelpful debate over whether a tsunami was ever in the cards.

That Aspen’s August 2020 estimate has thus far proved too high likely stems from a few factors.

First, people might not be the best predictors of whether they’ll make rent. The stress people feel in other parts of their lives — data from early in the pandemic showed high levels of food insecurity, anxiety and depression — might lead to stress about how they’ll afford housing, even if they are in fact able to pay rent. This wouldn’t be the first time a measure of confidence in housing stability would inadvertently pick up people’s generalized anxiety: During the development of Prindex, a global property-rights survey, researchers became skeptical of asking people about their “confidence” in staying housed because the question appeared to capture general concerns unrelated to respondents’ housing security.

Third, the Aspen estimate was based on the confidence levels of not only those behind on rent but also those current on rent. It’s safe to assume that renters who were current on rent would be at less risk of eviction than those behind on rent, regardless of their confidence about affording it. So while 32.5 percent of all renters in Aspen’s dataset expressed low confidence (i.e., “no” or “slight” confidence) in making next month’s rent, it is likely that only the 13.9 percent of renters who were both low on confidence and already behind on rent were at risk of eviction. Based on approximately 43 million renter-occupied households, this would translate into approximately 6 million households and 14 million individuals at-risk of eviction — less than half of the low-end of Aspen’s August 2020 estimate.

The Aspen Institute wasn’t the only think tank to make large eviction predictions based on the Household Pulse Survey. In January 2021, the Urban Institute focused solely on survey respondents who were already behind on rent to produce an estimate of 10 million renters at risk of eviction. But the estimate disregarded that of these 10 million renters, only 1.68 million said they were “very likely” to be evicted in the next two months (and nearly 2 million said they weren’t at all likely to get evicted).

Around the same time these estimates were being released, data from the National Multifamily Housing Council, which tracks actual rent payments across about 11 million rental units, and survey data from Avail, an online platform that serves independent landlords, were signaling that rent payments weren’t declining very much. Though these sources cover only a subset of renters, they arguably reinforce the case that more cautious estimates would have been more appropriate.

Now, as post-moratorium eviction figures come into focus, the outsized predictions are turning into easy fodder for conservative publications. The absence of an eviction tsunami has been met not with celebration or acknowledgement of the preventative effects of proactive social policy, but with debate over whether a tsunami was ever likely.

Today, the Eviction Tracking System established by Eviction Lab is the best tool we have for tracking evictions in the United States. It covers six states and 31 major cities, but it is only able to track eviction filings for one-quarter of the nation’s renters, and doesn’t track actual eviction judgments. Even with the Eviction Tracking System, most local governments do not report annual eviction statistics, much less where evictions are concentrated or the amount of back rent that is prompting evictions. Notwithstanding unprecedented attention on evictions over the last year, 38 percent of rural officials and 22 percent of city officials recently told the National League of Cities that they didn’t know whether evictions have increased or decreased from last year.

To truly understand evictions and make data-informed decisions to prevent them, states and counties need the resources to track and share their own eviction data, and that data needs to be aggregated into a national government database. With such a system, researchers will be better positioned to provide policymakers with the accurate estimates they need.