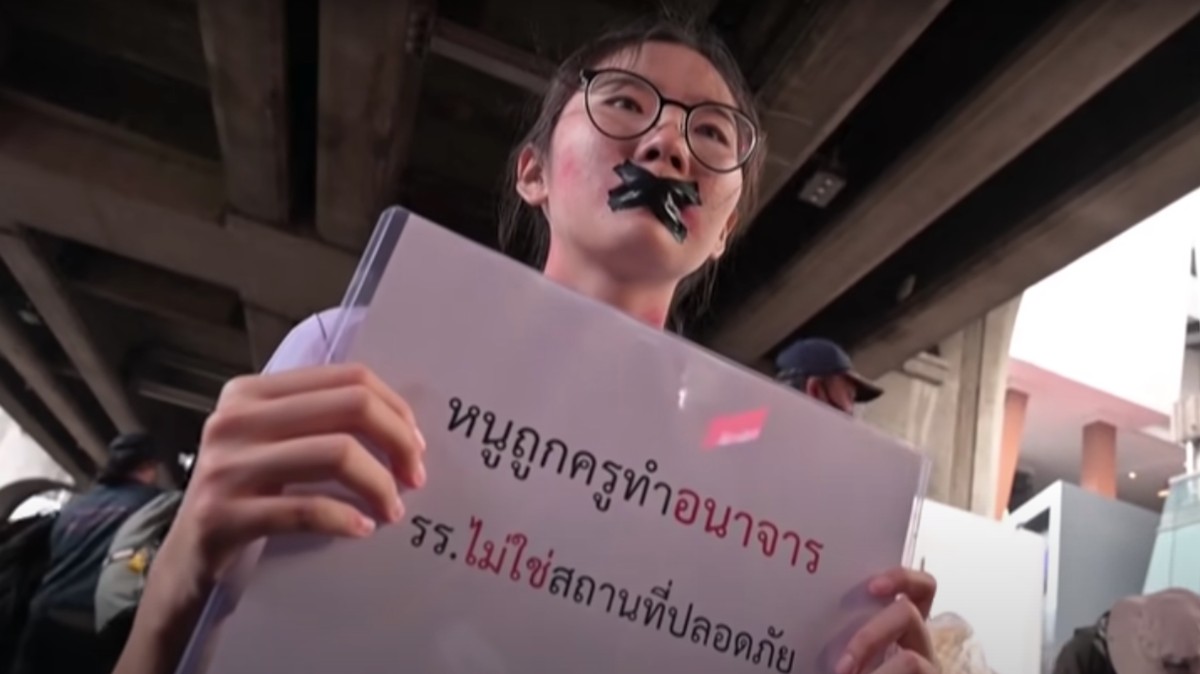 Nalinrat Thuthubthim was in high school when the attack happened. She’d often stay on campus after school had ended, working on drafts of speeches with her male teacher for upcoming contests.

With no female staff around at night to help her with the shutter on the toilet doorway, she’d ask him to help her lift it. But on one such night, the teacher followed her into the toilet stall. There he held her around the neck with his arm, and with his other hand, he groped her under her clothes.

“I froze, I stayed still and wanted to cry. My mind was blank, it froze. My hands and feet were cold,” Nalinrat said in an interview with VICE World News for documentary Politics of Sex, released last week.

The next day, she told a female teacher about the assault. The teacher blamed it on the clothes she was wearing, saying they showed off her body shape and were sexually provocative. Nalinrat showed VICE reporters what she wore that night: a drab grey T-shirt and black jogging pants.

The teacher also told her not to tell her parents about the incident as it “might cause many issues.” Nalinrat obliged, keeping the assault to herself.

“I started having panic attacks in the second month after the incident. I had seizures until I fell asleep every night for years, until I sought treatment,” she said. Nalinrat was eventually diagnosed with panic disorder related to the incident.

Angkana Intasa of the advocacy group Women and Men Progessive Movement Foundation pointed to the double standards present in Thai school textbooks, which blame women for sexual assault and associate clothing with rape.

“Women are told to remain virgins before marriage and not learn about sex, but men can talk about sex and have sex,” Angkana told VICE World News.

“This kind of content shouldn’t be in textbooks at all. It blames women, but it doesn’t question the perpetrators of sexual assaults, why they couldn’t restrain themselves from sexually assaulting others.”

Nalinrat’s case is not an isolated one. The World Health Organization says around 30,000 women are sexually abused in Thailand every year. About 18,000, or 60 percent, of them are girls aged five to 20, most of whom are students.

The problem permeates Thailand’s public schools, with the kingdom recording 159 cases of sexual abuse committed by teachers over the last 10 years, with it suspected many more go unreported.

In April 2020, a viral video of a school teacher molesting a 12-year-old girl shocked the country. A month later, allegations surfaced that five teachers were among suspects who gang raped a female student over the course of a year. While just last month, a family filed a complaint with police against a teacher for allegedly molesting their 11-year-old son over a three-year period. The teacher was also said to have molested at least five pupils in grades 3-6.

Nalinrat herself says that she tried to talk to staff when she heard of another incident of sexual abuse against a different student at her school, but her efforts were for naught. Communities often silence survivors in order to avoid controversy, to the point of letting the attackers go free, said Angkana.

A constitutional monarchy ruled by a military-dominated government, Thailand’s authoritarian politics are reflected in this abusive school culture, says Nalinrat.

“Teachers always show that they have rights over our bodies such as forcing haircuts, pulling of bra straps, pulling the crotch or even touching a male student’s sexual organ,” she said.

Fed up with the culture of silence and victim-blaming, Nalinrat participated in student protests in the capital Bangkok in November 2020, where activists from the Bad Students group demanded an end to abusive and repressive practices in Thai schools.

Nalinrat stood in the middle of the crowd with her mouth muzzled by black electric tape while she held up a sign that read: “I was sexually assaulted by a teacher. Schools are not safe places.”

It was a step to liberate herself and other young people from the weight of having gone through abuse and being shamed for it.

“Back then, I didn’t tell anyone as it was shameful. I hated myself,” Nalinrat said, recalling the thoughts that hounded her into silence. “If I didn’t have breasts, I wouldn’t have had a body that could sexually arouse, as others commented. If I didn’t trust him, it wouldn’t have happened. I blamed it all on myself.”

Following her protest, more than a hundred students messaged her to tell her about their own experiences of sexual abuse. It gave her a sense of purpose and courage. But she also received hate messages from people trying to disparage and discredit her, including one who said she is only after fame.

“It got me thinking that this person is a fruit of the society that views sexual assault victims as shameful and [people who] should be ashamed of themselves,” she said.

Today a model and university student, Nalinrat campaigns for education reform and helps survivors of sexual abuse in schools by connecting them with organizations that help them recover from their experiences. She echoes calls by campaigners like Angkana for the government to include education about sexual assault in the school curriculum, so that students can prevent it from happening to them and know what to do if it does.

“It gives me the strength to stand up to set a new norm that [being a sexual assault survivor] is not shameful,” Nalinrat said. “Those who have committed sexual assaults should feel most guilty and ashamed.”