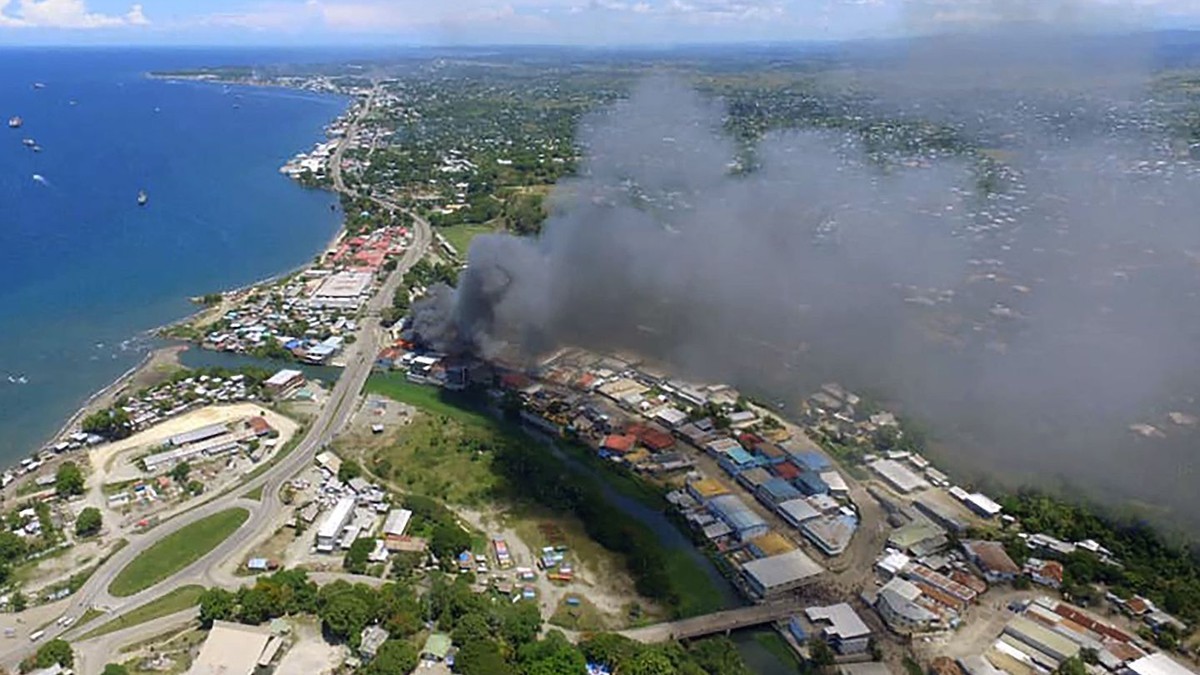 Protesters are demanding the resignation of Solomon Islands’ prime minister due to a shifting of diplomatic ties from Taiwan to China. Photo by ROBERT TAUPONGI / Contributor

The Solomon Islands capital of Honiara is being rocked by violence, arson and civil unrest as throngs of protesters demanding the resignation of Prime Minister Manasseh Sogavare clash with authorities.

The initially peaceful protests dramatically escalated on Wednesday as police fired tear gas and rubber bullets to disperse the large crowds that had gathered outside the city’s Parliament House. Public and private buildings including a police station, a high school, a bank branch and a number of Chinese and locally owned shops were later set on fire, and protesters looted shops in Honiara’s Chinatown and marched to the Chinese embassy, according to The Solomon Islands Herald.

Sogavare announced a 36-hour lockdown of Honiara after the violent protests, and on Thursday night Australian Prime Minister Scott Morrison announced that Australia would deploy a peacekeeping force to Solomon Islands to assist in “riot control.” The deployment, which follows requests for assistance from Sogavare under a 2017 bilateral security treaty, will include 73 Australian Federal Police and 43 Australian Defence Force personnel.

Morrison insisted that the deployment was aimed at peacekeeping, and that Australian forces would not intervene “in any way” with Solomon Islands domestic politics.

The demonstrations are linked to ongoing tensions between Sogavare’s central government, which shifted Solomon Islands’ diplomatic ties from Taiwan to mainland China in 2019, and the people of Malaita Province – the most populous island in the country’s archipelago – who have vocally condemned the move. Malaita Province Premier Daniel Suidani has been particularly outspoken in his opposition of the national government’s decision to prioritise relations with China at the expense of a 36-year diplomatic relationship with Taiwan.

In an open letter published in August 2019, a group of senior politicians declared that: “We believe the long-term interests of our country – in terms of our development aspirations, as well as respect for democratic principles, human rights, rule of law, human dignity, and mutual respect – lie with Taiwan, not the PRC [People’s Republic of China].”

In May 2020, Suidani reaffirmed his position, stating: “We are strongly opposed to PRC communist ideology and investment,” according to Solomon Times.

Local police have also said they will “continue to conduct high visibility patrols throughout Honiara day and night to make sure those planning to disturb the peace that continues to dominate our communities have any chance of carrying out their criminal activities.”