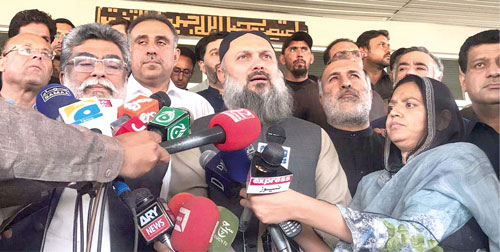 A no-confidence motion was submitted against Balochistan Chief Minister Mir Abdul Qudoos Bizenjo in the provincial assembly on Wednesday with the support of some lawmakers from his own party.

The motion bears the signatures of 14 lawmakers, including Bizenjo’s predecessor Jam Kamal Khan Alyani of the Balochistan Awami Party who had resigned when a similar motion was filed against him last year.

Sardar Yar Muhammad Rind, the parliamentary leader of the PTI in the Balochistan Assembly, filed the no-confidence motion. Rind said the group had no “personal issues” with Bizenjo, adding that their problem was with his administration and style of governance.

Addressing a press conference in Quetta, Rind alleged that there were issues of law and order, corruption and examples of bad governance in the current setup. He added that former chief minister Jam Kamal Khan’s government seemed “like an angel to us” in retrospect.

He said differences with the former chief minister were with the pace of work but there were not any questions about his honesty or corruption.

Rind also hit out at PTI Chairman Imran Khan, saying he wouldn’t have resigned as his special assistant, had he agreed with the ousted prime minister’s treatment of Balochistan. “We tried and struggled with Khan sahab but he did a lot of injustice with Balochistan and its people,” Rind said, adding that loyal PTI workers were overlooked in favour of others.

Meanwhile, Alyani rued that there were “a lot of expectations” from CM Bizenjo, calling for an accountability process within their parties as well.

Taking to Twitter, Buledi said that the motion had been filed once the “required numbers” were gained. “Now, graceful exit is to resign immediately otherwise [Bizenjo] would be voted out,” he warned.

According to the Constitution, a no-confidence motion needs the signatures of 20 per cent of the make-up of the legislative body to be tabled for discussion and half the members must vote in favour of it to be passed.

Out of the 65-member Balochistan Assembly, 33 lawmakers need to back the motion when it is put up for voting.

Meanwhile, Balochistan government spokesperson Farah Azeem Shah said that Bizenjo will remain the chief minister of Balochistan for the next five years as well. “The no-confidence motion against him will fail,” she maintained.