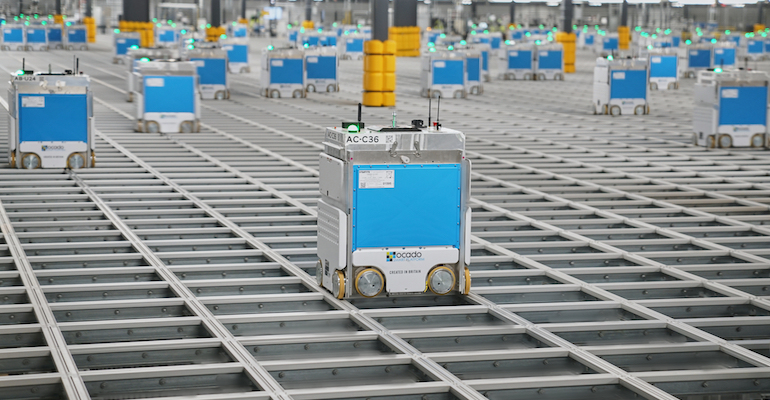 “We are thrilled to expand and introduce our innovative Kroger Fulfillment Network to one of the fastest-growing areas in the country and have the opportunity to grow our workforce,” Gabriel Arreaga, senior vice president and chief supply chain officer at Kroger, said in a statement. “Through the incredible partnership and support from the city of Aurora and Adams County, Kroger Delivery can accelerate its commitment to provide exceptional customer service through our state-of-the-art facility and end-to-end cold solutions, including custom-built refrigerated vans, to ensure our delivery customers receive the freshest products directly to their doorstep throughout the Denver region.”

In announcing the Aurora CFC, Kroger also reported that its Ocado-automated CFC in Pleasant Prairie, Wis., is now operational. The supermarket giant had announced plans for the 350,000-square-foot facility — serving online grocery customers in Wisconsin, northern Illinois and northwest Indiana — in November 2019.

So far, Kroger has announced 17 Ocado-driven CFCs, with four now operational. They include a  CFC in Monroe, Ohio — Kroger’s first Ocado facility — that went live in April 2021; 375,000-square-foot CFCs that opened in Groveland, Fla., last June and in Forest Park, Ga., this past February; and a 350,000-square-foot CFC that launched in Dallas this spring. In early March, Kroger said it aims to construct a 270,000-square-foot, “Cleveland region” CFC that will serve areas in northeastern Ohio and Pennsylvania, with the latter representing the grocer’s 37th state.

Other Ocado CFCs reported by Kroger run from 135,000 to 375,000 square feet and include locations in Frederick, Md.; Phoenix; and Romulus, Mich., as well as Charlotte, N.C., the Pacific Northwest; and the Northeast, the latter representing another location where Kroger lacks stores, along with Pennsylvania and Florida (save for a Harris Teeter store in the Jacksonville area). The retailer also has announced plans for two CFCs in Southern California and two more in Florida.

Kroger and Ocado also have announced 10 supporting “spoke” facilities, which serve as last-mile, cross-dock sites to enlarge the service radius of CFCs. Five spokes are now live — in Miami, Tampa and Jacksonville, Fla.; Lockbourne, Ohio; and in Indianapolis — and another five are planned for Louisville, Ky.; Oklahoma City; and Austin and San Antonio, Texas, and Birmingham, Ala.

When unveiling their partnership in May 2018, Kroger and United Kingdom-based Ocado Group said they aimed to open 20 CFCs in the United States over the next three years. The Ocado CFCs and supporting facilities use vertical integration, machine learning and robotics to service online grocery orders and are expected to extend Kroger’s reach to a larger geographic footprint, including areas where it doesn’t operate brick-and-mortar stores.

“As we continue to expand our nationwide CFC program, Kroger and Ocado Group are now live with five state-of-the-art fulfilment centers across the USA. As this site ramps up, Kroger Delivery will bring a world-class online experience to homes across the Denver metro area, powered by some of the most advanced technology available anywhere in the world,” stated Luke Jensen, CEO of Ocado Solutions, which has its U.S. headquarters in Tyson, Va.