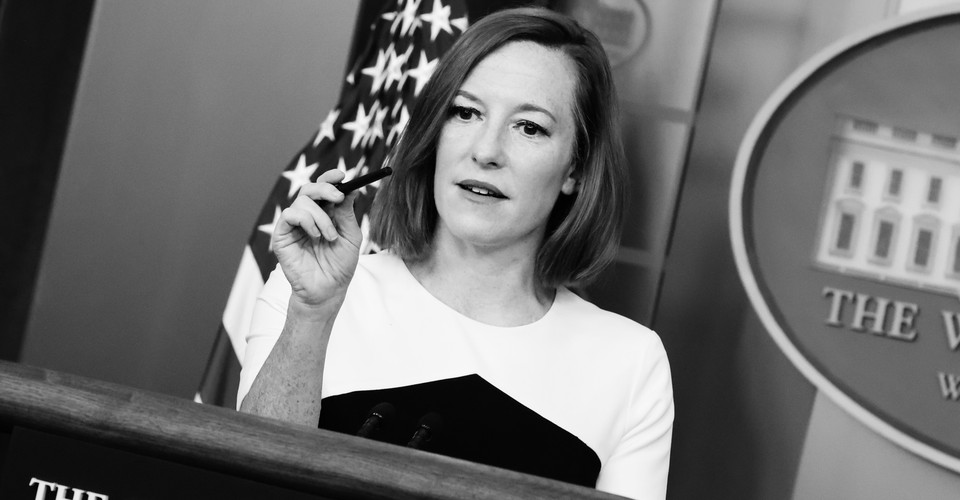 At a White House press briefing yesterday, NPR’s national political correspondent Mara Liasson asked Press Secretary Jen Psaki a question that’s been on many people’s minds: “There are still a lot of countries, like Germany and the U.K. and South Korea, that basically have massive testing, free of charge or for a nominal fee,” she said. “Why can’t that be done in the United States?”

Psaki gave a vague response about the administration’s efforts to increase test accessibility and decrease costs, but Liasson followed up: “That’s kind of complicated, though. Why not just make ’em free and give ’em out and have them available everywhere?”

Psaki responded with a sarcastic smile. “Should we just send one to every American?” she asked.

YES, screamed the internet in the hours that followed. Yes, you absolutely should—and not just one test. President Joe Biden had just announced that private insurance companies must reimburse consumers for at-home rapid COVID tests, and his administration has committed billions of dollars to buying them directly for use in nursing homes and other high-risk places. Still, the pundits are restless. Biden’s latest initiative is “timid,” tweeted Craig Spencer, a public-health physician at Columbia University. The epidemiologist Eleanor Murray called Biden’s plan shortsighted. The sociologist and rapid-test advocate Zeynep Tufekci said the government should “just make rapid tests cheap. Or distribute them in workplaces and schools.” In short, the experts argue, the U.S. should follow in the footsteps of countries like Germany and the United Kingdom, where people can get mail-order packs of tests from the government, purchase $1 tests at supermarkets, visit complimentary testing centers, or undergo twice-weekly virus checks at work or school.

Read: The plan that could give us our lives back

This latest round of rapid-test frustration has capped an entire season of hand-wringing. Throughout the fall, numerous media outlets ran big, smart explainers on why rapid tests are so expensive and inaccessible here compared with overseas, and published op-eds calling this a fatal mistake. In October, the former Harvard epidemiologist Michael Mina—America’s biggest antigen-test advocate—co-wrote the latest in a series of op-eds suggesting that “rapid tests are the answer to living with COVID-19.” Although the pandemic has evolved, this pitch remains the same: By “flooding the zone” with modest, plastic diagnostic tools, we can “quash the pandemic” and get “back to ‘normal’ life.” An important simulation study first posted in June 2020 and led, in part, by Mina found that by testing three-quarters of the population every few days, we could “drive the epidemic toward extinction” in less than six weeks.

The problem, then and now, is that reality doesn’t often behave like a simulation, and that widespread, rapid COVID testing—at least as it’s been practiced in Germany, the U.K., and other countries—hasn’t really quashed anything. ​​That’s not because the tests are failing as a diagnostic tool for individuals and high-risk groups. Rather, we don’t have compelling real-world evidence that using them on a massive scale would change the course of the pandemic.

Let’s focus on Germany, the recent poster child for rapid-test ubiquity. A September newsletter from The New York Times titled “Where Are the Tests?” opened, typically of the genre, with a photo of a German swab site, and it featured a chart contrasting Germany’s low COVID mortality rate with the growing death count in the U.S. In a September Stat essay, Daniel Oran and Eric Topol cited Germany’s efforts too, saying rapid tests could help reduce the spread of the virus so much that it “becomes more a nuisance than remaining a national emergency.” At the time, case rates in Germany were indeed much lower than those in the U.S. But two months later, the German health minister declared a national emergency: Infections, hospitalizations, and deaths have skyrocketed there since October. The country now has a higher rate of infection than the United States suffered during this fall’s peak.

I’ve noticed no change in tone from the rapid-testing advocates who were so eager to laud the German model. An article published just last week by Yahoo News, headlined “Omicron Variant Shows Need for Rapid COVID Tests,” bizarrely suggested that “a test-fast, test-often approach has helped Germany return to normal life” (while linking to a New York Times story from June). Life is anything but normal in Germany right now. Even before the latest wave, the government required people to show proof of vaccination, recovery from infection, or a recent negative test result in order to enter many establishments, including restaurants, bars, movie theaters, and salons—a policy called the “3G rule.” In light of its devastating outbreak, Germany has now dropped the testing option and is enforcing a nationwide “2G rule” instead: Patrons must provide proof of vaccine-induced or natural immunity if they want to make use of most public venues. If cases continue to rise, Germany plans to institute a 2G+ plan—meaning people will need both immunity and a negative test—as well as potential vaccine mandates.

Why did a billion rapid tests fail to prevent this crisis, in a country that has inoculated the majority of its citizens? The facile answer is to say that the public just isn’t performing enough tests. No country has achieved the frequency of screening suggested by simulation models like Mina’s. One Hamburg virologist has argued that the 2G rule should be replaced by a 1G system—a “test offensive” in which immunity status doesn’t matter and only a negative test entitles you to socialize. But the government’s position is that too many people are refusing the vaccines. “Everyone in Germany will be vaccinated, recovered, or dead,” the health minister has warned. It’s telling that he didn’t include “tested” on that list.

There’s little sense in trying to divine the perfect public-health policy from one country over a short period of time. Each administers a patchwork of measures, and outbreaks strike unpredictably—confounding any analysis. (Remember when a decline in cases in February led some experts to declare that the U.S. would have “herd immunity by April”?) Germany’s summer lull was heralded as a rapid-test success story, but perhaps the warm summer season could be given as much credit.

What about the U.K., where the government has abandoned most public-health measures except for vaccines and rapid-test surveillance? The British continue to experience a tremendous COVID caseload, but so far the viral death rate has been mercifully blunted since cases began rising in June. To understand why this has occurred—and whether widespread antigen tests are responsible—we’d need to disentangle the effect of the U.K.’s plentiful diagnostics from its high inoculation rate and ample natural immunity from past waves. Free, rapid COVID-19 testing won’t contain infections while crowds are still allowed to gather indoors, the Harvard epidemiologist William Hanage told Nature last month, after looking at what’s happened in the U.K.

Part of why a country-by-country evaluation proves so baffling is because you have to consider each nation’s peculiar social circumstances. In 2020, Slovakia deployed the military to mass-test nearly every man, woman, and child—probably preventing some infections. (Further rounds of testing were scuttled because devices were in short supply; Slovakia is now experiencing its own COVID surge.) But in the United States, achieving near-daily COVID screening for most residents seems out of reach. Mask and vaccine mandates have already fomented widespread anger. In that context, it’s hard to imagine how we could pursue aggressive testing mandates, especially for the already-vaccinated. Germany’s foiled policies in many ways represent the outer limit of what would be conceivable in American politics: The government made it cheap and easy to know your coronavirus-infection status, created vaccine and testing passports, and heavily promoted the lifesaving benefits of inoculation. Yet Germany still failed to prevent a devastating wave.

I’m sure advocates like Michael Mina would agree that rapid tests don’t need to “drive the epidemic toward extinction” in order to save lives, and that the situations in Germany and the U.K. might well be even worse without so much surveillance. (I reached out to him to discuss this question, but did not hear back before this story went to press.) I wouldn’t want to keep these useful devices away from anybody, and subsidizing tests for those who want them would be a drop in the bucket compared with the government’s overall pandemic spending. People have a right to know whether they’re carrying the virus. But we were promised normalcy, and the countries that were supposed to show us how to get there aren’t even close.

The emergence of the Omicron variant presents further challenges to widespread testing. If Omicron turns out to spread more quickly than Delta—as many scientists fear—then any screening program would have to test people even more frequently than studies have suggested in the past, just to maintain the same protective barrier. (Delta’s super-speed is already stretching the limits of our surveillance protocols.) We can try to make up for this by further ramping up testing, but it’s a losing battle: The chances of achieving viral suppression will dwindle while the costs and complexity will soar. (The U.K. government has pledged the equivalent of nearly the entire National Health Service budget for its surveillance program.)

Whatever the cost of tests right now, some people are eager to integrate them into their routine, while others acquiesce to getting swabbed only when it’s forced upon them. The people most vulnerable to the virus—the unvaccinated—may well be among the least likely to undergo regular, voluntary testing. And even those of us who are willing to check for infections still have to grapple with the inherent risk of false positives and false negatives. Part of the reason rapid tests were delayed for so long throughout the world was because experts expressed legitimate concerns about the rate of inaccurate results.

The press secretary struck the wrong tone with her sarcastic dismissal of free rapid tests. Flooding the market with them—or sending one to every American—would be a helpful, if expensive, initiative. In other words, it’s a serious idea worth seriously considering. But this isn’t just a matter of applying common sense. Even with more testing, the U.S. won’t suddenly come to resemble the idealized output of a computer model; our day-to-day lives could end up looking more like the complex public-health crisis now engulfing Europe.