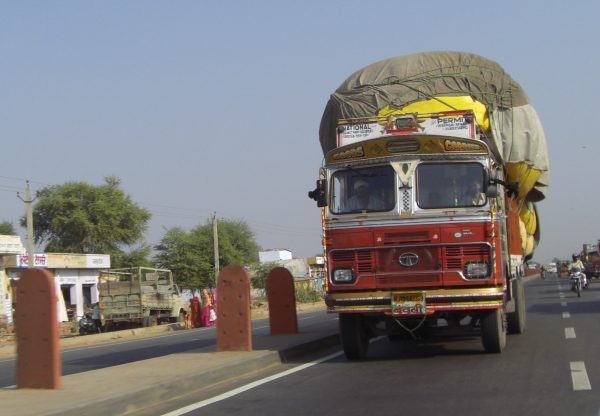 Pakistan has agreed to allow India to send humanitarian assistance in the form of 50,000 metric tons of wheat to Afghanistan through an overland route, as millions of Afghans face hunger and starvation under Taliban rule.

The development is significant for a number of reasons.

Afghanistan is on the brink of a massive food shortage. The World Food Program (WFP) recently said that the country faces a shortage of 2.5 million tons of wheat and that only percent of its people has “enough to eat.”

The support from India is important as a harsh winter descends on the country. Pakistan has also announced that it will match India’s support by sending 50,000 metric tons of wheat and other supplies to Afghanistan.

This is perhaps the first time in a long time that Pakistan has allowed India to use the land route through it territory for any trade activity to Afghanistan. For a long time, Pakistan has only allowed Afghanistan to export goods to India. The country doesn’t allow any two-way trade through the Wagah border crossing.

Pakistan has also announced that it will facilitate the return of Afghan patients who are currently stuck in India for medical treatment. The development shows that it is possible for India and Pakistan to work together in some capacity to provide a boost to humanitarian efforts in Afghanistan.

Get briefed on the story of the week, and developing stories to watch across the Asia-Pacific.

Although Pakistan’s foreign office has said that the passage of wheat is being allowed on an “exceptional basis,” the conversation may change as Islamabad pushes the international community to actively offer financial and humanitarian support to Afghanistan.

It is important to note here that it was on the request Amir Khan Muttaqi, the Taliban regime’s interim foreign minister that Pakistan agreed to allow India to transport wheat via Pakistan. Pakistan’s acceptance of the Taliban request indicates that neither Pakistan nor the Taliban has any problem with accepting India’s humanitarian assistance.

It is possible that the Taliban could request more assistance from India in the coming weeks. Possibly, New Delhi could announce additional aid for Afghanistan, meaning Islamabad will be forced to open its borders again as it doesn’t want to be seen as bringing its conflict with India into the complicated situation in Afghanistan, where the Taliban regime faces the daunting challenge of feeding millions of Afghans.

Moreover, Pakistan wouldn’t like the international community to see it as standing in the way of Indian humanitarian aid for Afghanistan just because they continue to compete for influence in Afghanistan.

The Taliban have shown that they are not opposed to opening dialogue with India over trade and other issues. Sher Mohammad Abbas Stanekzai, a senior Taliban leader recently said that India is “very important for this subcontinent” and that the Taliban would like to continue Afghanistan’s “cultural,” “economic,” “political” and “trade ties” with India “like in the past.”

This essentially shows that the Taliban is not apprehensive about drawing Pakistan’s ire over its outreach to India.

Much has been written and discussed about Pakistan’s perceived influence over the Taliban and how it could undermine India’s outreach to the group. However, the Taliban’s influence over Pakistan has gone by largely ignored. Recent developments indicate that such Taliban influence is significant.

For instance, Pakistan is relying on the Taliban’s assistance to negotiate a peace agreement with the Tehreek-e-Taliban Pakistan (TTP). Taliban have confirmed that they are acting as a mediator between Pakistan and TTP. What this potentially means is that Taliban will over time develop more influence over Pakistan and could perhaps push for a dialogue between India and Pakistan as far as Afghanistan’s issue of trade is concerned.

It is important to note here that the Turkmenistan-Afghanistan-Pakistan-India (TAPI) pipeline was once a project that Pakistan promoted robustly. Arguably, the Taliban wouldn’t mind if India and Pakistan resumed cooperation on the project again, which could significantly increase these countries’ dependencies over each other as far as their energy needs are concerned.

Afghanistan may have been a country where Pakistan and India’s competition has been most consequential, it is also a country which has the potential to bring both sides together.

A recently published study titled “Normalizing India-Pakistan Trade” by Indian Council for Research on International Economic Relations projected the bilateral trade potential between India and Pakistan in the range of $11 billion-$20 billion. Another study by the International Monetary Fund estimated the trade potential between the two countries at $37 billion. When seen regionally, this untapped potential could uplift Afghanistan’s economy and with it improve regionally stability.

Could Taliban become the force that would convince both India and Pakistan into curtailing their hostilities in Afghanistan and open wider discussion on trade? So far, it is encouraging to see that the Taliban have asked Pakistan to open its borders for Indian aid. For Afghanistan to survive further chaos and mayhem, Pakistan and India’s cooperation is necessary. The Taliban should make further efforts to pose difficult questions to both capitals and push them to start discussions over the question of India and Pakistan’s cooperation in Afghanistan.