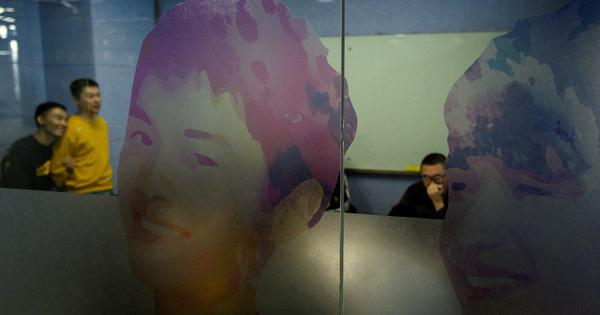 The Chinese government has recently taken action against what it calls “sissy men” – males, often celebrities, deemed too effeminate.

On September 2, government regulators banned their appearance on both television and video streaming sites. Using the Chinese derogatory slur “niang pao” – literally, “girlie guns” – Chinese cultural authorities explained that they were rolling out a rule to purge “morally flawed celebrities” in order to “correct aesthetics” in “performing styles” and “wardrobes and makeups”.

Technically this is a rule, not a law. But thanks to the strong control the Chinese government exerts over the industry, the tech companies that give these celebrities a platform have quickly fallen in line.

The international community may view the rule as yet another example of Chinese repression centred on LBGTQ communities.

And this could be true, to an extent.

However, as someone who studies China’s queer cultures, I am also attuned to the way pronouncements made by the Chinese government often cloak a hidden agenda.

To me, it is no coincidence that the ban has come during the intense national campaign against China’s domestic big tech giants, which the government increasingly sees as a threat to its ability to keep tabs on its citizens.

In the mid-2010s the Chinese government’s grip on the country’s entertainment sector began to weaken after decades of control over who could star on TV and what sort of stories could be told. TV dramas, films and talent shows produced by private tech companies started to take off, while ratings and ad revenues of state-owned television stations tumbled.

Beginning in 2016, the government started to censor web videos with the same criteria it had been using for television. However, the restrictions seemed to only inspire more creative and subversive expressions of sexuality on video streaming sites.

For example, images of two men kissing and holding hands were banned. So creators simply used dialogues and gestures, like intense eye contact, to convey homosexual intimacy. Furthermore, these rules did not regulate the physical appearance of characters.

Since 2017, shows produced by the country’s leading video streaming platforms – many of which mimic the basic format of shows like “American Idol” and “The Voice” – have launched the careers of a number of effeminate male celebrities.

These shows include “The Coming One” and “CHUANG 2021”, which appear on Tencent Video, a streaming site owned by Tencent, the Chinese technology conglomerate that also owns WeChat. Meanwhile, “Idol Producer” and “Youth With You” appear on another video service provider, iQiyi, a subsidiary of Baidu, the Chinese equivalent of Google. The male participants in these shows are often young, dress in unisex clothing, and apply orange-red eye shadow and lipstick, along with heavy makeup that whitens their skin and thickens their eyebrows.

In the past, female audiences would clamour for masculine looks or physiques in their male celebrities. Today’s young Chinese people, on the other hand, are more open to challenging gender stereotypes. Within online fan communities, femininity in male celebrities is not stigmatised – instead, it is celebrated. They will call their female idols “brother” or “husband” and their male idols “wife” – names meant more as compliments than insults.

This shift can be traced, in large part, to the influence of K-pop, the South Korean pop music phenomenon in which many of the singers reject traditionally masculine ideals.

An easy way for male actors to achieve stardom is to appear in adaptions of “boys’ love novels”, an online fiction genre originating in Japan that features homoerotic relationships between men.

Take the actor Zhang Zhehan. For years, he played masculine characters in several TV shows. Still, he remained largely unknown until he appeared in the adaption of the boys’ love novel Word of Honor, which appeared in early 2021 on Youku, a streaming service owned by the tech giant Alibaba.

His female fans even invented a meme to describe Zhang’s rapid rise to fame: “manning up for a decade failed, but [he] succeeded as a wife overnight”.

Despite their perceived effeminate mannerisms, these male celebrities have amassed a huge following among female viewers. Typically, their shows can generate billions of views and considerable ad revenue.

Celebrities whose fame emerged out of shows like “The Coming One” and “Idol Producer” are called “traffic stars” because they are more dependent on their massive followings than on any specific skill such as singing, acting or dancing.

Since views, shares and likes have become the dominant metric for a celebrity’s popularity and market value, fans will organise to actively manipulate social media features such as ranking lists and trending topics in support of their idols. This “data worship” – to use the terminology of the Chinese authorities – ultimately boosts the revenue of the big tech companies that promote and host the stars.

Therefore, the profits of tech companies and the proliferation of internet influencers, movie stars and TV personalities have become increasingly intertwined.

For a country seeking to rein in the power of big tech companies, these effeminate idols become an obvious target.

Although it could be argued that everyday LGBTQ people are not the real target of the most recent policy, I believe it will almost certainly have a pernicious effect on China’s marginalised gender groups and LGBTQ communities.

In China, the government has long exploited gender and sexuality in the service of political needs. During the first three decades of the People’s Republic of China – from 1949 to 1978 – homosexuality was portrayed as the epitome of capitalist vice and was, therefore, seen as incompatible with the values of the Communist party-state.

After China’s market reforms in 1978 and the “opening up” of the country, people – especially in China’s cities – became more comfortable calling themselves gay.

In the lead-up to the 2008 Beijing Olympics, the state-run Xinhua News agency even published articles championing the gay website Danlan – a precursor to Blued, the most popular gay dating app in the world – in order to portray China as an inclusive and diverse place and to deflect international criticism of China’s poor record on human rights.

Thanks to digital technology and the growth of online subcultures, China has achieved some real progress in the acceptance of gender and sexual minorities over the past decade. Young women often speak of having a “gay confidant” (“gaymi” in Chinese), while young straight men are keen to call their male friends “good gay buddies”(“hao jiyou”).

So it is a bit surprising to see a gender slur – “girlie guns” – being written into government policy and repeated throughout the country’s mainstream media outlets.

And it is not difficult to envision more anti-LGBTQ bullying, harassment and violence in schools and workplaces as a result.

After all, if the government condones a slur, who is to say it is wrong to use it to attack others?

Shuaishuai Wang is a Lecturer of New Media and Digital Culture at the University of Amsterdam.

This article first appeared on The Conversation.